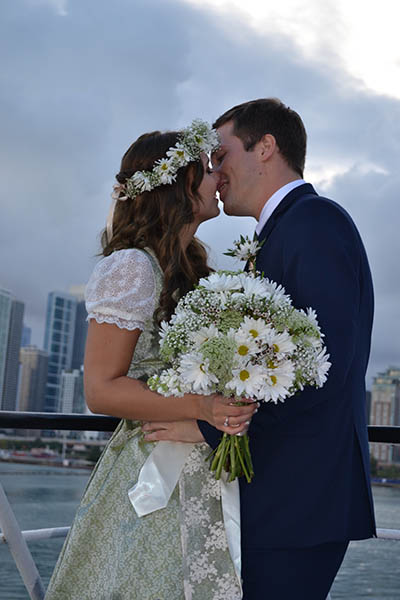 Long Distance Romances CAN Work Out

In 2015, Désirée, a German native, was lost in Chicago, wandering Michigan Avenue. A gentleman, Justin, approached and asked if she needed help. After he got her moving in the right direction, he asked if she’d like a drink. Sadly, Désirée was a flight attendant for Lufthansa, and it was too close to her flight. But he luckily got her number.

When Désirée arrived in Europe, she found a text from Justin waiting for her, asking if she had a good flight. Shortly after that, Justin had to travel to Brussels, and Désirée suggested some sights he should see. Not too long after that, she flew to LA and he was in Vegas at a trade show, and they met in LA. Later she visited Justin in Chicago.

Talking for hours followed, despite time zone differences and different hemispheres. Valentine’s Day 2016 had them meeting in Miami, and Désirée started spending her free time flying into Chicago to visit.

In September, Justin took her to the Hancock Building, to view the whole of Chicago. There he proposed with a ring from R C Wahl Jewelers. He said she wasn’t just marrying him, but also Chicago. And since she’s an avid football fan, the Chicago Bears are now her team.

Three days later they were wed on, aptly, the Spirit of Chicago. On such short notice, her choice of clothing was limited, so Désirée wore her traditional German dirndl. She’s working towards American citizenship. And she’s left her friendly skies to join us at R C Wahl Jewelers. She speaks four languages and is learning the language of jewelry. She already knows the Language of Love.